A Philosophy B.A. with Two Choices 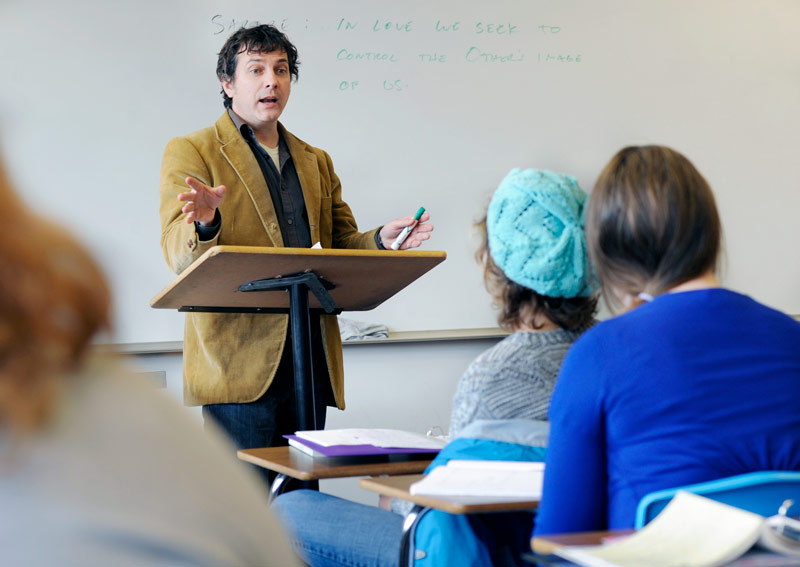 Students complete core courses centered on the foundations of philosophical and religious traditions, and then concentrate their studies in philosophy or religion. In advanced courses, students may analyze moral issues in areas from animal rights to genetic engineering, or examine proofs for the existence of God, immortality and the problem of evil.

Philosophy is critical thinking. Deciding whether an idea is worth believing takes intellectual and emotional maturity. That’s why you probably didn’t study philosophy in high school, and it’s one reason many college students don’t study it.

Philosophers do two things that make them unusual: they take both good and bad ideas seriously, and they think reflectively.

Although philosophy is different from science, history, literature, and art, it is related to all of them. And just as they have practical value, so does philosophy.

More about the Philosophy Concentration

Whether you go on to graduate school for the academic study of religion or to seminary, religion courses at WCU prepare you to discuss and engage religious issues from the world’s religions.

The study of philosophy and religion prepares students to think through challenging ethical questions and decisions, to reason logically, to create sound arguments, and to communicate clearly in speech and writing. The insights and skills students gain help them succeed as lawyers, doctors, theologians, counselors, politicians, scientists, directors, teachers, artists and many other professions.

More about the Religion Concentration

What’s Involved in the Study of Philosophy and Religion?

Ethics: Each of us at times faces decisions that have ethical significance. The choice of a career or a decision to marry or stay single raises questions about motives (selfish or altruistic?) and the consequences of decisions (beneficial or harmful?). Most of our choices affect others.

Logic: How do we argue well? How can we resist persuasion and manipulation? Logic helps us tell sound reasoning from unsound, so that we can sort out the messages of newspapers, ads, and political speeches.

History of philosophy: What motivates a suicide bomber? Is sexism wrong in all cultures? When is war justified? Who gets to vote? The history of philosophy teaches us about different world views as well as their historical origins, limitations, and insights.

Philosophy in academic disciplines and professional practices: What good is art? Do defendants have too many rights? If cloning saves lives, what’s wrong with it? Philosophy students apply insights from logic, ethics, and history of philosophy to art, law, literature, public policy issues, religion, and science.

Religious traditions: What is unique and what is universal about religions? What are the practices, concepts, beliefs and history that define a religion? How do religions interact? What happens when religion and science encounter each other? How does religion lead to cooperation or clashes? In courses about eastern or western religious traditions you may expand your ideas or think critically about your own and other world religions.

Consider a Second Major in Philosophy

Setting WCU's philosophy degree apart is the opportunity to concentrate studies in philosophy or religion, a focus on ethical and social / political issues, and a structure that supports completing a second major in another discipline. Already have a major that you’d like to combine with a healthy diet of critical thinking? Consider a second major in philosophy. Recent graduates also majored in Biology, English, Psychology, Hospitality and Tourism Management, International Studies, Spanish, Communication, History, Music, Criminal Justice, Anthropology, Sociology, Environmental Health, Political Science and even special studies in Japanese.