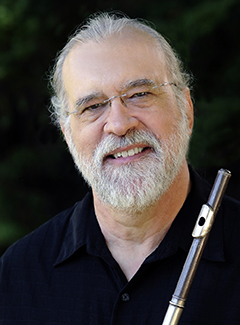 Eldred Spell is professor of flute at Western Carolina University. He holds degrees in flute performance (including the PhD in flute performance from Michigan State University), but his principal influences have come from outside academia. These include Clement Barone, Geoffrey Gilbert and William Bennett. An active performer, Spell has appeared as a soloist (and taught masterclasses) in most of the United States and internationally. <br><br>Trained as a flutemaker, he has done considerable research into in the history of the flute, its acoustics and construction. While a student of Barone, Spell designed a new piccolo headjoint and presented the prototype to his teacher. Barone played it in the Detroit Symphony until his retirement and today Spell piccolo headjoints may be heard in a number of major American orchestras. In 2005 Spell collaborated with William Bennett and Trevor Wye to release an improved scale for the flute. This has been adopted by several flute makers, including the world’s largest – Gemeinhardt.<br><br>Spell maintains a substantial collection of historical flutes and piccolos, representing three centuries of the instrument's evolution. These are used for performance, research and as examples for teaching. He performs primarily on a 19th century instrument made by Louis Lot, considered the"Stradivarius of the flute."<br><br>In 2008 Eldred Spell served as visiting professor of flute at the Royal Academy of Music, London. In 2018 an international group of former pupils commissioned a new work for flute ensemble by composer Bruce Frazier and performed in his honor at the Orlando convention of the National Flute Association. In January, 2020 the same group held a three-day flute festival at WCU specifically to honor their teacher. <br><br><br>

-Performance practice in the 18th and early 19th centuries.<br>-Acoustic aspects of both flute and piccolo with particular emphasis on tuning.<br>-Historical development of the flute.<br>-Performance Health Care