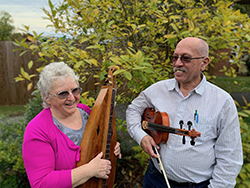 What a thrill and honor it is to have Phyllis and Jim Gaskins on the Dulcimer U staff this year to teach a class in traditional old fiddle tunes and songs - Galax style!

Phyllis Gaskins specializes in the old Southwestern Virginia “Galax Noter/Drone Style Dulcimer” she learned to play over 40 years ago from Galax dulcimer player and maker Raymond Melton.  This style goes back in Raymond’s family, as well as other makers and players in the region, to the middle of the 1800s and before.

As a master of the style and as a master teacher she has spent more than four decades sharing her skill and passing on her knowledge of the dulcimer and traditional music to many others around the country. Having been born in the foothills of the Blue Ridge Mountains she sings in the traditional unaccompanied style of her grandmother and mother and sometimes accompanies herself with noter style dulcimer.

Phyllis has won numerous dulcimer competitions and was recognized as a 2010-11 and 2018-2019 “Virginia Master Folk Artist” by the Virginia Foundation for the Humanities.  Since retiring from 39 years of teaching elementary school, she has completed The Galax Dulcimer Book. Check out  www.virginiadulcimer.com  for more about Phyllis.

Since 1989 Phyllis has been assisted in her workshops and performances by her husband, Jim Gaskins.  Together they learned from traditional fiddlers in their travels through Southwest Virginia, West Virginia, North Carolina, Tennessee and Ireland.

Together the Gaskins were the 2013 recipients of the Highland County Fiddlers Convention “Recognition of Devotion to Old Time Music” award.