Alonzo C. Reynolds, former Buncombe County superintendent of public schools, became new president of the Cullowhee Normal and Industrial School in 1912. His arrival brought simmering questions about the school’s mission to a boil. Could CNIS realize its founders’ loftier educational aspirations if it remained simply a county high school? By 1918, the institution revised its curriculum to offer a more broadly appealing six-year program: two years of preparatory classes (grades eight and nine) followed by a four-year curriculum that resulted in a junior college degree. Three degree programs -- in teaching, classics, and vocational agriculture -- were offered; almost all the students continued to choose teaching.

Reynolds also improved campus facilities. Electricity and central steam heat were added or upgraded, and a new classroom/administration building named for state Superintendent of Education and CNIS board member J.Y. Joyner was built. The village and farm community of Cullowhee supported the small, growing school.

By the late 1920s, debate over the school’s future arose again. After Robert Madison’s brief second term as president (1920-23) a new leader, Hiram T. Hunter, oversaw the school’s transition from high school status. The high school program was turned over to the county, and in 1925 the institution became a junior college teacher training institution, the Cullowhee State Normal School. In addition to the change in its mission, the school also increased in size with the addition of Dave Rogers’s 65-acre “Town House” farm in 1924. Enrollment increased from about 200 to about 350 students. Dormitory life became a more important feature of the school scene, along with extracurricular activities. 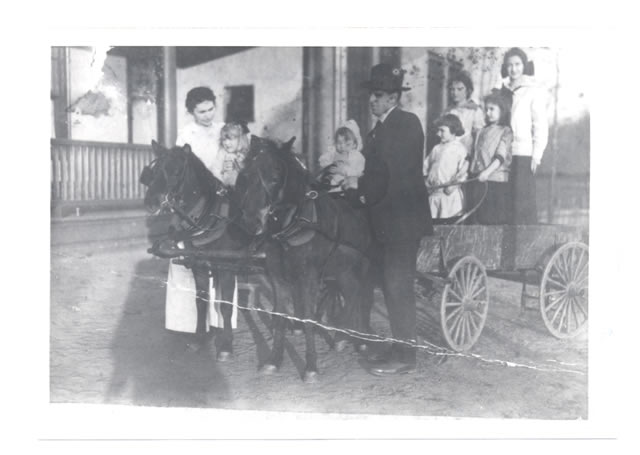 When Alonzo C. Reynolds arrived in Cullowhee in 1912 to replace Robert Lee Madison as president of Cullowhee Normal and Industrial School, he discovered that the school owned no vehicles. To remedy that deficiency, he purchased a small cart and two Shetland ponies that were used to haul supplies from Sylva. The Reynolds family posed here in front of the Davies Home. Left to right: Mrs. Reynolds, Margaret (who died in 1917), Alphonzo, Alonzo C., Elizabeth, Sally, Ruth, and Mary. 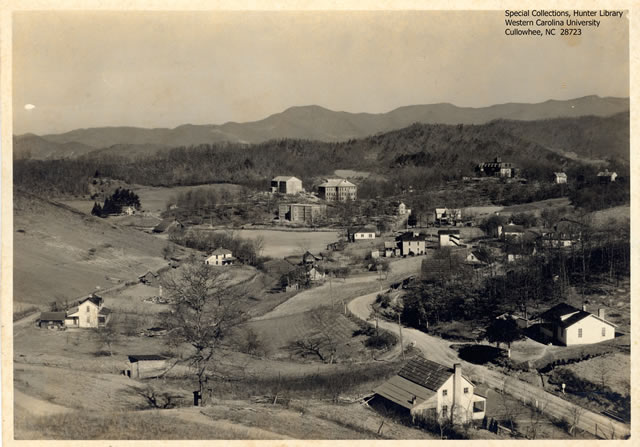 The CNIS campus, probably around 1923, seen from Dix Gap near the present-day intersection of Central Drive and NC 1001. President Hunter, Dean Bird, and history professor Edgar Stillwell all lived in the Dix Gap community (foreground). The three large buildings clustered in the rear center are (L to R) Moore Dormitory (before the wings were added to its ends), the Training School, and Joyner Building. Old Madison is the large building on the hilltop in the rear right; behind and below it, at the Tuckasegee River, was the village of Cullowhee. Sarah Madison, who grew up in Cullowhee and attended WCTC in the mid-1940s, remembered that the village "had a post office.... It had a soda shop that was owned by Mr. Buchanan, and it had Battle's Grocery Store. And then there was Moss General Store, which I really liked, it had penny candy." Looming in the far distance are the Plott Balsam Mountains that rise above Sylva. 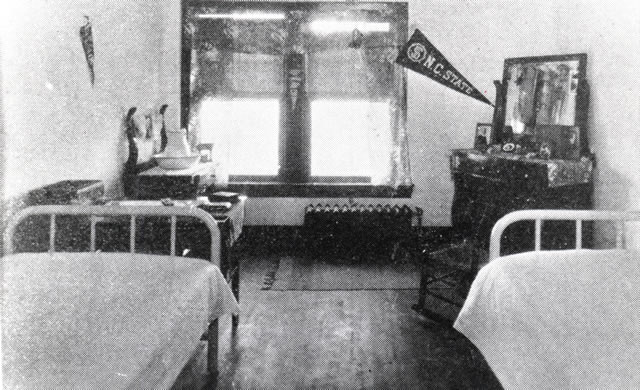 A dormitory room at the Normal School. After the construction of Moore Dormitory for women in 1925, men lived in Old Madison and Davies. The N.C. State banner might indicate a male student's educational plans after he completed his two years at CSN. Ray Gibbs, a 1926 graduate, recalled that electric power was turned off in the dorms at 9:00 p.m.: "I spent many an evening and maybe half the night studying by candle." There were proctors who lived in the dorms to supervise the men, but "they were very inactive . . . because we were just one big bunch; we played ball together, we fought together, we ate together, we slept in the same building, we stuck together, so a proctor wouldn't have been of much benefit."

This panorama, created by merging several photographs, shows the CNIS campus probably in 1923. The large building to the right is Moore Dormitory; its wings, which are visible, were completed in 1924. In front of it to the left (partly obscuring Moore) is Joyner Building which contained almost all of the school's administrative offices and classrooms until the 1930s. The building in the center is the Training School, completed in 1923; it served as the Cullowhee community's public grade school for 16 years and as an education laboratory where CNIS and later CSN students did their practice teaching. Behind the Training School water lines are visible running up the hill to the school's water system. The residences of Dix Gap are to the left. 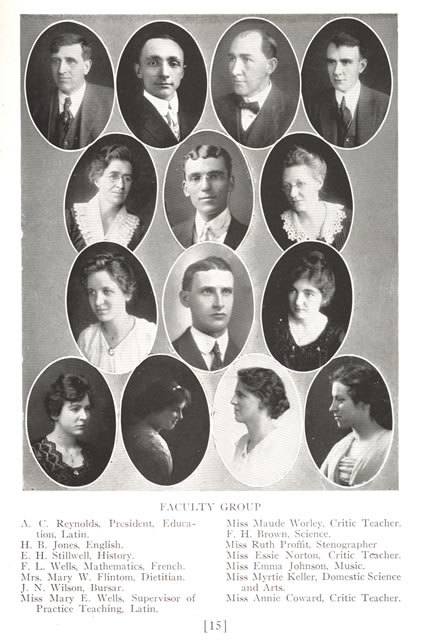 This earliest-known photograph of the entire faculty of the Cullowhee Normal and Industrial School was taken in 1918. Mrs. Mary Flintom, the widowed sister of President Reynolds's wife, came to Cullowhee in 1915 to run the school's kitchen and dining room. 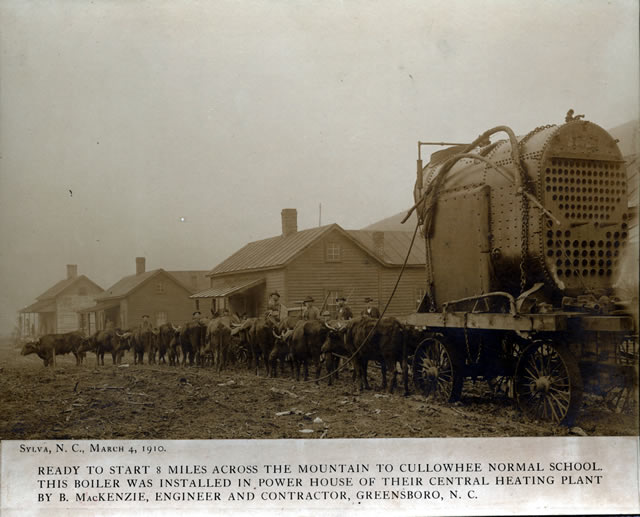 This boiler was installed in 1910 to power the school's first central heating plant. The boiler heated the Old Madison Building and the newly-completed Davies Home (the women's dormitory); the Joyner classroom building was added to the system when it was completed in 1913. 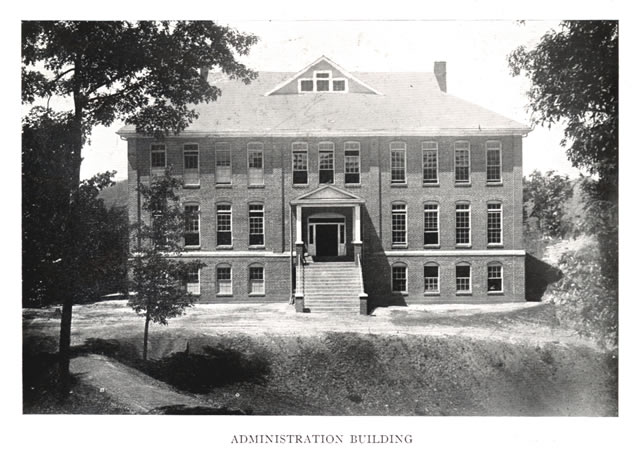 Joyner Building, opened in 1913 and named for state superintendent of education J. Y. Joyner, replaced the Old Madison Building as the center of student life. In addition to administrative offices and classrooms, it housed at various times the library, post office, book store, snack bar, and gymnasium. 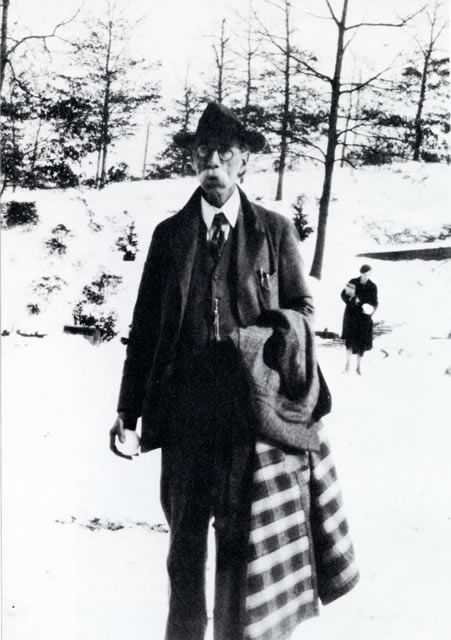 After his second resignation as president, Robert Madison remained to teach English until his retirement in 1937. His warmth and generosity and his love of teaching are still remembered by hundreds of alumni. His grandson James A. Madison remembers that "he was a well-respected person, an extremely intelligent individual. And a pack rat! He saved newspapers and magazines.... He knew where everything was." Here he stands with a snowball at the ready.

Hiram T. Hunter in front of Moore Dormitory in the 1920s. Like the two presidents before him, he was a son of the southern mountains and an experienced teacher. Hunter presided over a quarter of the institution's first century, a momentous period including the Great Depression and World War II. 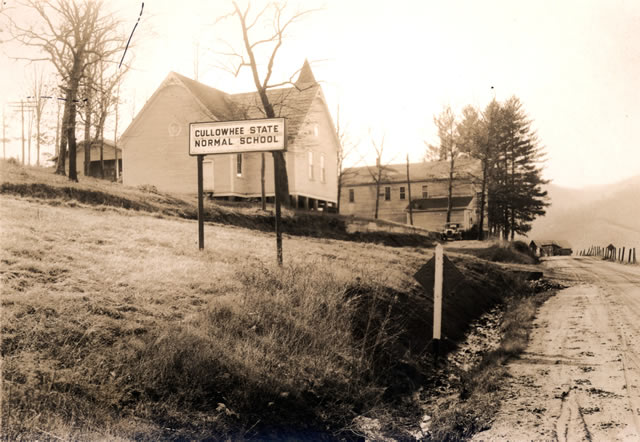 The entrance to Cullowhee State Normal School in the 1920s. The photograph was taken from the road where Hunter Library and the Steam Plant today face each other. The building in the foreground was the old Methodist Church that later moved down the road to its present location. The road between the sign and the church went up to Moore and Joyner Buildings. Beyond the church was the Dallas Wike store, later the Bryson store; Breese Gymnasium stands there now. The small structure attached to the store was the Cullowhee Post Office. The school later purchased the store and used it as a carpentry shop. 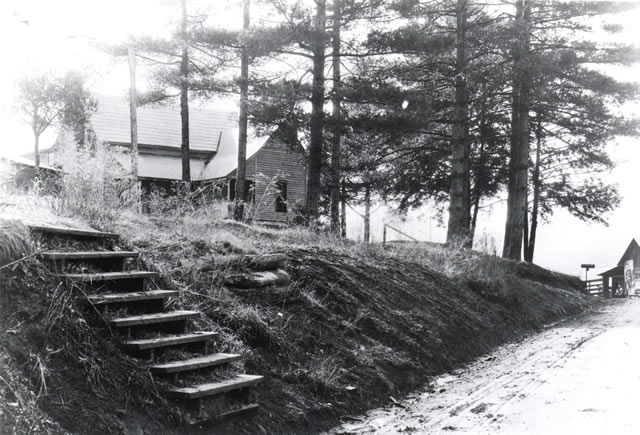 Just beyond Wike's store stood "Uncle" Dave Rogers's house in the pines (where Bird Building is now). The unpaved road at lower right, now Central Drive, was then Old NC Highway 106 that ran from Sylva to Cashiers. 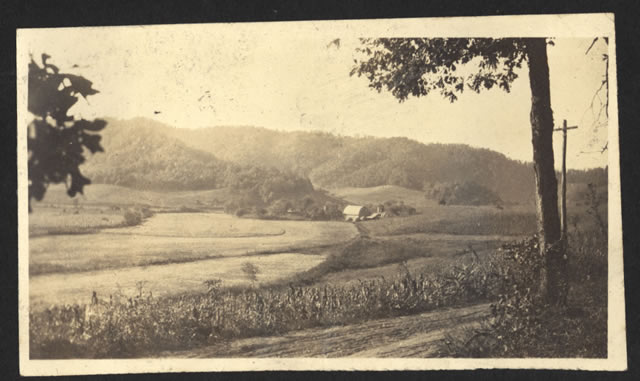 Much of the land that Western now occupies was once farmland. This photograph, taken in the 1920s from where the traffic light by BB & T Bank now is, shows some of that farmland. The land in the foreground was part of "Uncle" Dave Rogers's farm. The barn and silo in the background were part of Professor Frank Brown's farm, where Scott dorm now stands.

This early athletic field was on the Tom Ledbetter farm some distance from the campus. The field lay alongside the Tuckasegee River on the road to Sylva, just beyond the village of Cullowhee. The riverbank and the cut for the road, then named Highway 106 and now NC 1001, can be seen just below the hillside cabin. The site was later occupied by the Battle Trailer Park.