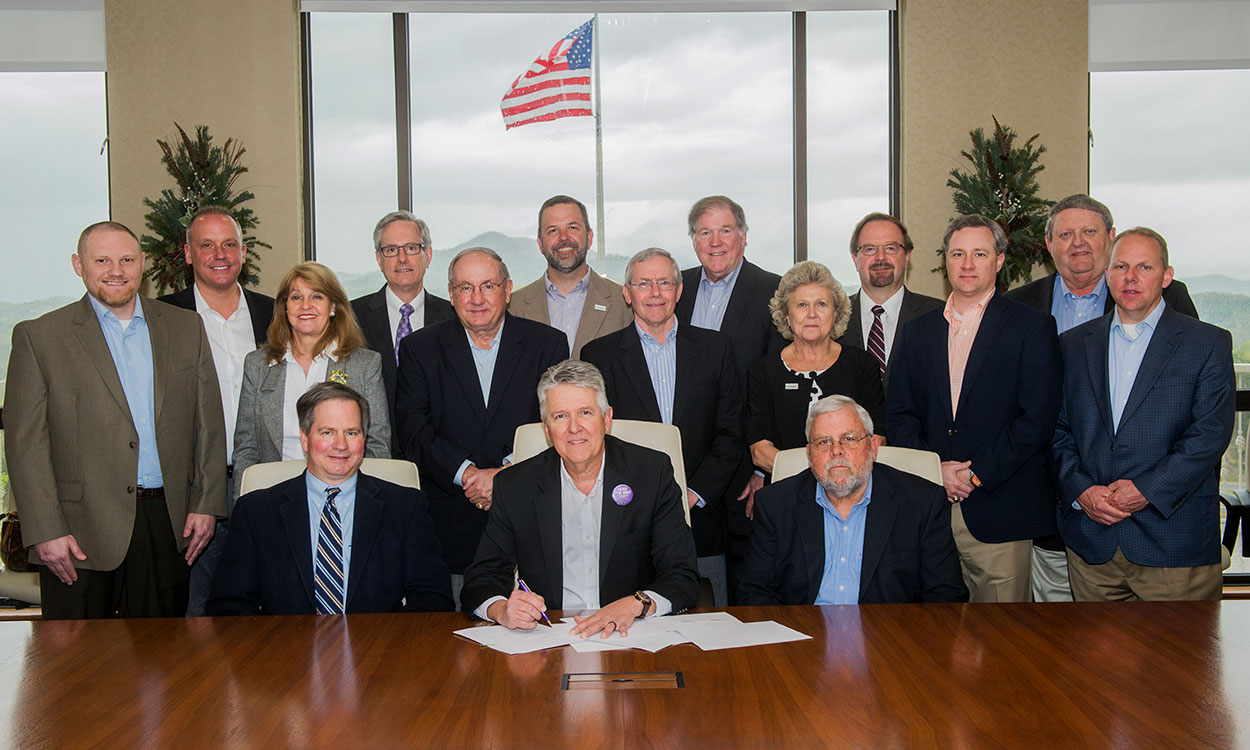 In recognition that more than 20 percent of Entegra Bank's workforce in Western North Carolina graduated from Western Carolina University, the financial institution's board of directors recently announced a $250,000 contribution to provide scholarship assistance to students from the region who want to study in WCU's College of Business.

The creation of the Entegra Bank Endowed Scholarship Fund comes after an employee survey earlier this year found that, of the bank's 205 employees across WNC, 42 received degrees from WCU, said Roger Plemens, president and CEO of Entegra Bank. In addition, 15 spouses, 22 children, five parents and 17 siblings of the bank's employees received degrees from WCU, said Plemens, who earned his bachelor's degree in business administration at WCU in 1977.

The contribution, made earlier this spring, will provide scholarship assistance to students from Buncombe, Cherokee, Clay, Graham, Haywood, Henderson, Jackson, Macon, Polk, Swain and Transylvania counties. Recipients of the Entegra Bank Endowed Scholarship must be full-time students majoring in accounting, business administration and law, computer information systems, entrepreneurship, finance, management or sales and marketing. Scholarships are renewable for up to four years for recipients maintaining a GPA of 3.0 or higher.

The Entegra gift is the latest as part of WCU's "Lead the Way," a comprehensive fundraising campaign inspired by the leadership of Chancellor David O. Belcher, who went on medical leave Dec. 31, 2017 after battling brain cancer since April 2016. He passed away June 17, 2018.

Belcher and wife Susan announced last October their pledge of $1.23 million in financial support for the "Lead the Way" effort, an announcement that has spawned several other significant contributions, including the recent gift from Entegra.

"I have had the good fortune to serve on the WCU Foundation Board during the 'Belcher years.' I have seen first-hand the great success WCU has experienced under Chancellor Belcher's leadership," said Plemens. "By giving to the 'Lead the Way' campaign, we want to keep that momentum going."

In addition to increasing the financial support available to WCU students through endowed scholarships, the fundraising effort also will seek support for experiential learning opportunities such as travel grants, paid internships, undergraduate and graduate research activities, and attendance at meetings of professional organizations. A third prong of the campaign will emphasize programmatic support to bolster the work of WCU's colleges, schools, departments and programs.

The gift to the "Lead the Way" campaign is not Entegra's first financial contribution to WCU. When it was called Macon Bank, the financial institution, under Plemens' leadership, created the Michael Morgan Memorial Scholarship Fund in 2007 through contributions totaling $44,000. A 1984 finance graduate of WCU, Michael Morgan served as the first vice president and chief lending officer of Macon Bank. The fund provides scholarships to juniors and senior from WCU who are majoring in business finance.