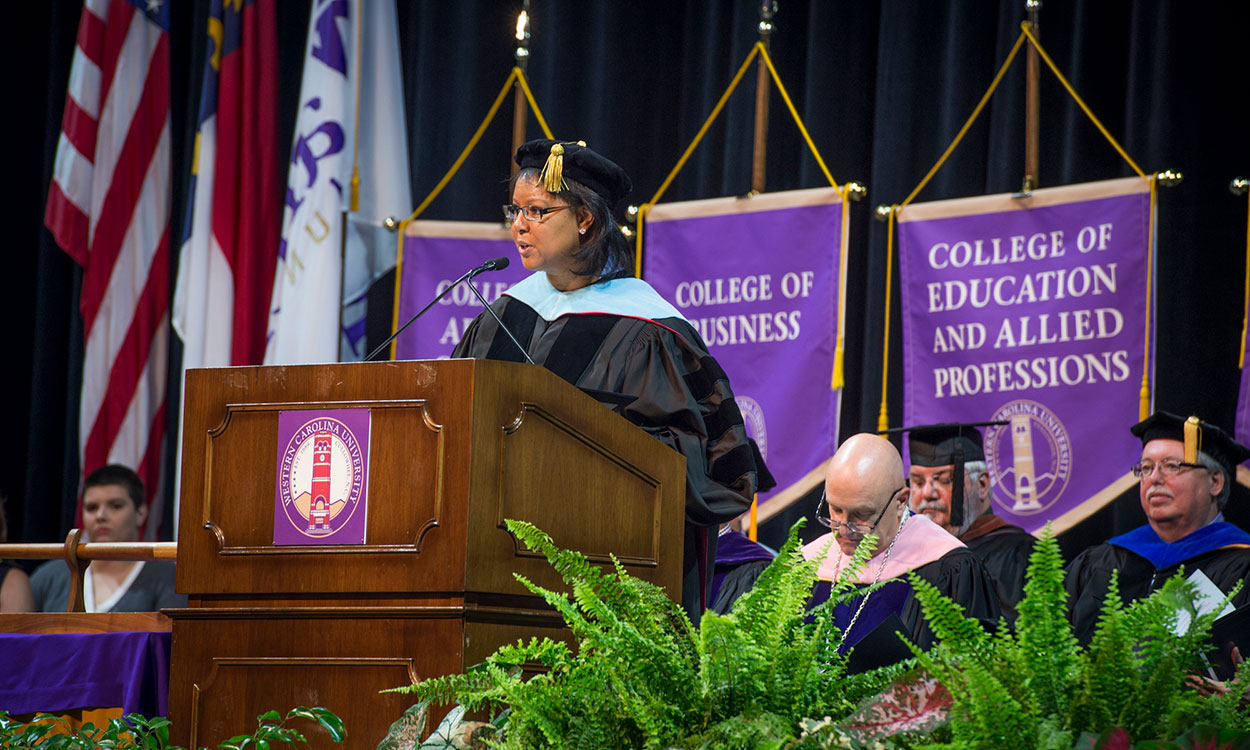 A first-generation college student who first set foot on Western Carolina University's campus in the fall of 1983 and has never left, rising through the ranks from incoming freshman to serve as the institution's second-in-command, has created an endowed scholarship fund in honor of her Jamaica-born parents.

Burton, who has bachelor's and master's degrees from WCU, said she wanted to honor her parents through the creation of an endowed scholarship because they always encouraged her and her siblings to pursue education.

"Education is such a key to success in the Jamaican culture, but access to it is more challenging than in the United States," she said. "There are community and junior colleges as well as teacher colleges, but only six four-year degree-granting universities on an island of almost 3 million people."

A much smaller percentage of the population earns four-year degrees than in the U.S., where that percentage is approximately 35 percent, she said. "Consequently, there is a much larger percentage of first-generation college students because parents often don't have access to higher education," Burton said.

Both of Burton's parents, Reuben and Yvonne Burton, were born in St. Elizabeth Parish, one of Jamaica's largest parishes, but moved to London in the late 1950s to raise their family – son Tony, born in Jamaica, and son Gary and daughters Carol and Barbara, born in London. The family returned to Jamaica in 1979, when Carol was 15, to reside in their dream home overlooking the Caribbean Sea.

After graduating from high school in Jamaica, Burton took to heart her parent's encouragement to pursue higher education, enrolling at WCU. She became aware of WCU through of a long-standing program between the university and Jamaica's Ministry of Education designed to prepare Jamaican teachers and school administrators, an initiative currently celebrating its 50th anniversary.

"While I didn't enroll at WCU as part of that program, my family became aware of WCU because my mother's cousin earned her master's degree in education from WCU in the mid-'70s, and she recommended the institution to my parents," Burton said. "When I arrived in 1983, more than 40 full-time Jamaican students were enrolled year-round."

Burton earned her bachelor's degree in nutrition and dietetics in 1987 and her master's degree in educational counseling in 1989, going on to receive her doctorate in adult and higher education in 2007 at N.C. State University, where her research was focused on faculty culture.

Burton began her lifelong career in higher education in 1989 as director of WCU's Special Programs in the College of Education and Allied Professions, reporting to then-Dean Gurney Chambers.

"I have known Carol and followed her career since she was a financially struggling student-worker when I was dean," Chambers said. "Chancellor David Belcher has said on many occasions that Western Carolina University is 'in the business of changing lives.' Carol Burton is a perfect example of why Western has this kind of impact on students."

"While Carol is now far removed from her days as a student worrying about how she was going to make ends meet, she no doubt remembers those days vividly and wants to ease the financial stress of those students who want to follow in her footsteps," he said. "I am not surprised in the least that Carol now wants to make life a little less stressful for some of those financially struggling, international students who want to enroll at her alma mater."

It did not take Burton long to start progressing up the career ladder, serving as director of WCU's Teaching Fellows program from 1992 through 2005. She successfully administered the self-study accreditation process for WCU as director of the Southern Association of Colleges and Schools Commission on Colleges review through 2007. 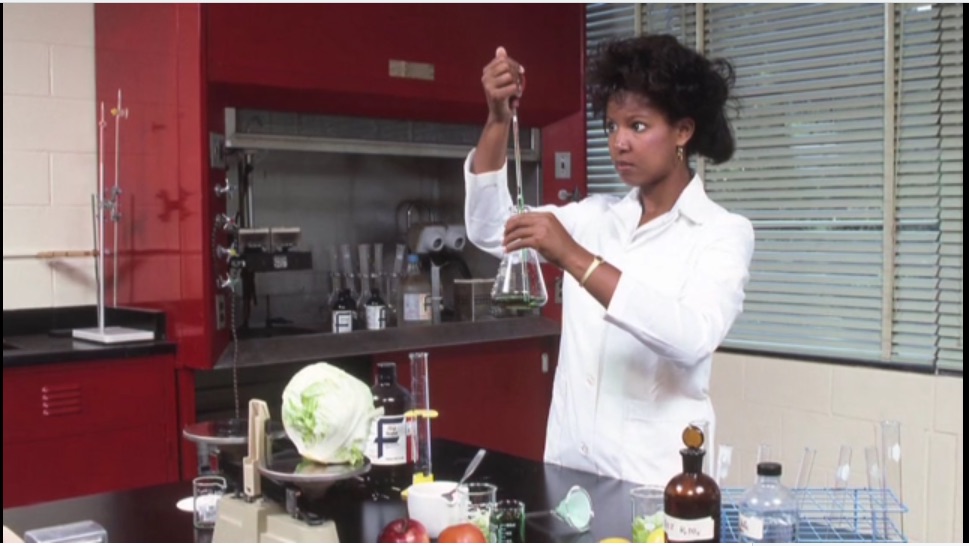 Burton studying as an undergraduate student in the 80's

Appointed assistant vice chancellor for undergraduate studies in 2007 and associate provost a few years later, Burton led implementation of WCU's first Quality Enhancement Plan. She was named acting provost and vice chancellor for academic affairs in January 2018 as Belcher went on medical leave. Upon the selection of WCU's next chancellor and the return of Acting Chancellor Alison Morrison-Shetlar to her position as provost, Burton will step back into her role as associate provost.

For Burton, it's 35 years and counting at Western Carolina, including her time as an undergraduate, a graduate student, staff member and academic administrator. And she says she would not have it any other way. "I can't imagine doing anything else and working anywhere other than WCU – the opportunities, the rich life, the social, cultural, civic and educational events, I love it all," she said. "A university career is the best profession one can have. You get to make a difference in the future, and students are worth every bit of energy we put into this passion."

Named the Dr. Carol Burton Endowed Scholarship for Graduate Students in Honor of Reuben and Yvonne Burton, the fund will provide aid to students pursuing master's or doctoral degrees in any program offered through WCU's Graduate School. Recipients can be full- or part-time students and must have and maintain a GPA of 3.0 or higher. Preference will be given to students from Jamaica, although all international graduate students meeting the award's criteria are eligible.

"Neither of my parents had a college education, and I am the first in my immediate family to earn a bachelor's degree, much less master's and doctoral degrees," she said. "Unfortunately, this is fairly typical in Jamaica, so I hope that establishing this scholarship in my parents' honor will inspire students from Jamaica to pursue graduate studies."

Burton's gift pledge is part of WCU's "Lead the Way," a comprehensive fundraising campaign inspired by the leadership of Chancellor Belcher, who died June 17 after battling brain cancer since April 2016. Belcher and wife Susan announced last October their pledge of $1.23 million in financial support for the "Lead the Way" effort, an announcement that has resulted in numerous other contributions.

"This scholarship is inspired by David and Susan Belcher, Gurney and Ann Chambers, Beth and Victor Lofquist, and Anna and Jack McFadden, among other longstanding members of the WCU community. I am honored to be able to follow in their footsteps," she said. "It also is inspired by my parents, who held high expectations for me personally, academically and professionally. Their confidence in me propelled me to succeed in ways I couldn't have imagined."

In addition to increasing financial support of WCU students through endowed scholarships, the fundraising effort also will seek funding for experiential learning opportunities such as travel grants, paid internships, undergraduate and graduate research activities, and attendance at professional conferences. A third prong of the campaign will emphasize programmatic support to bolster the work of WCU's colleges, schools, departments and programs.