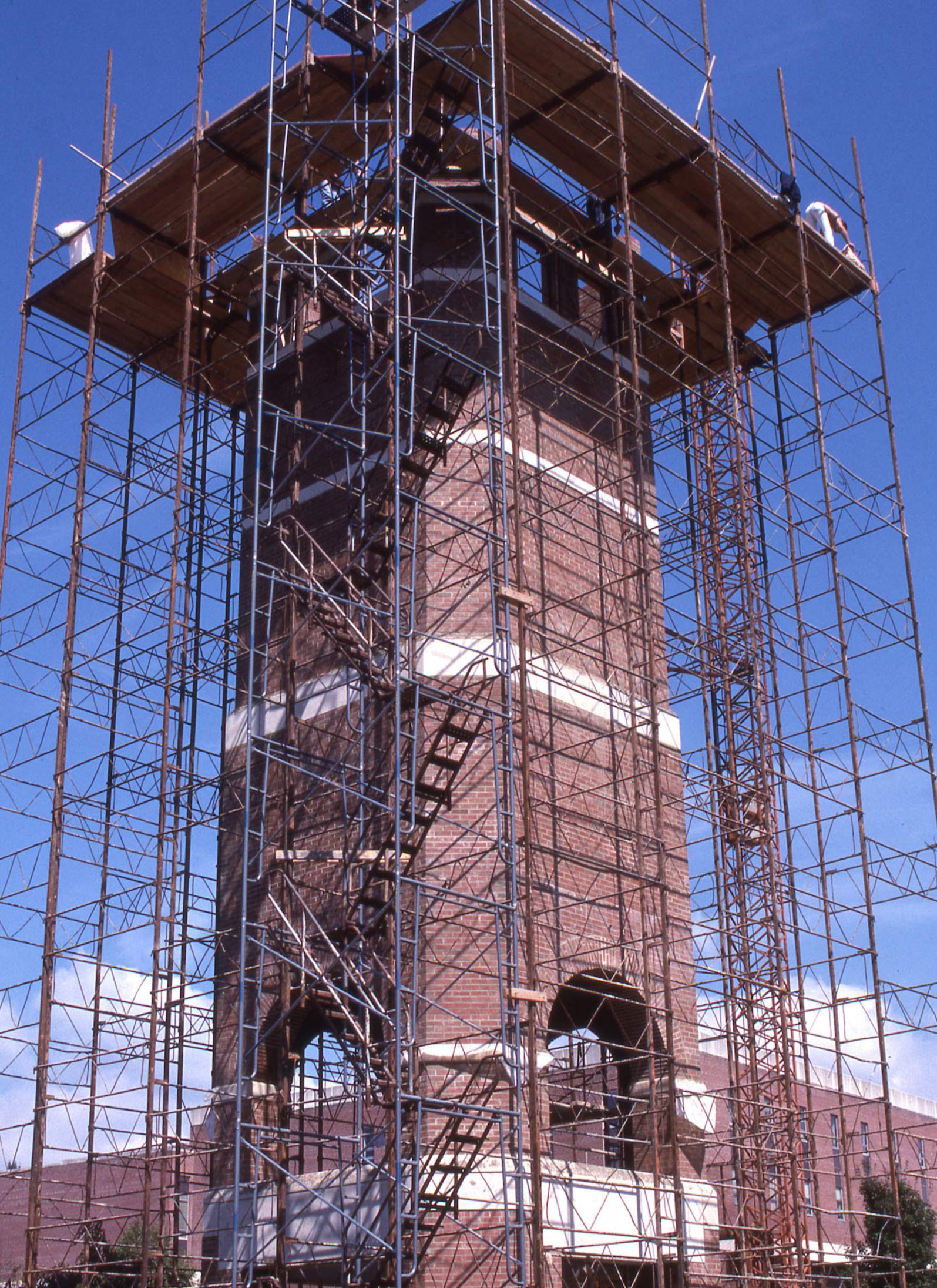 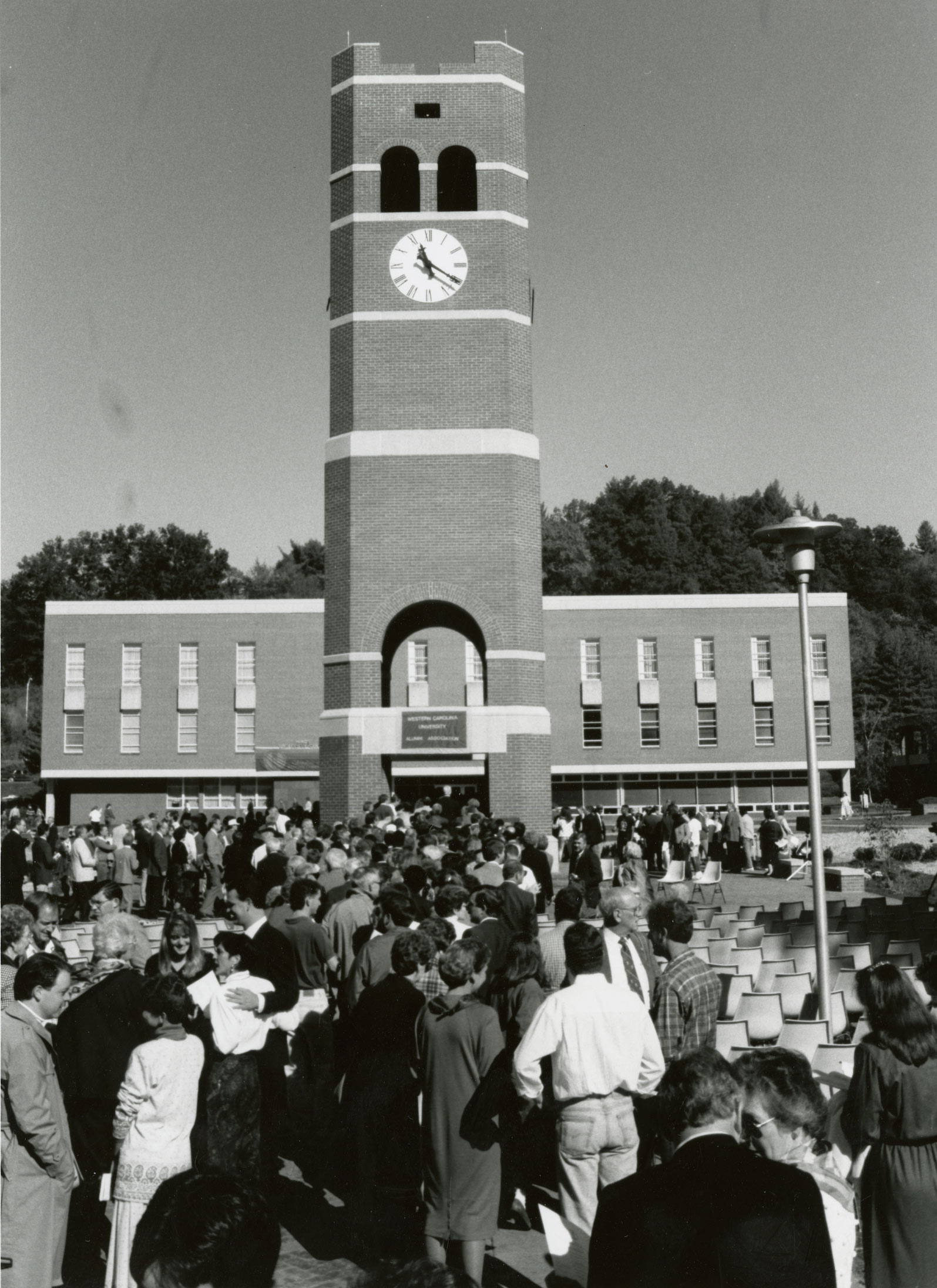 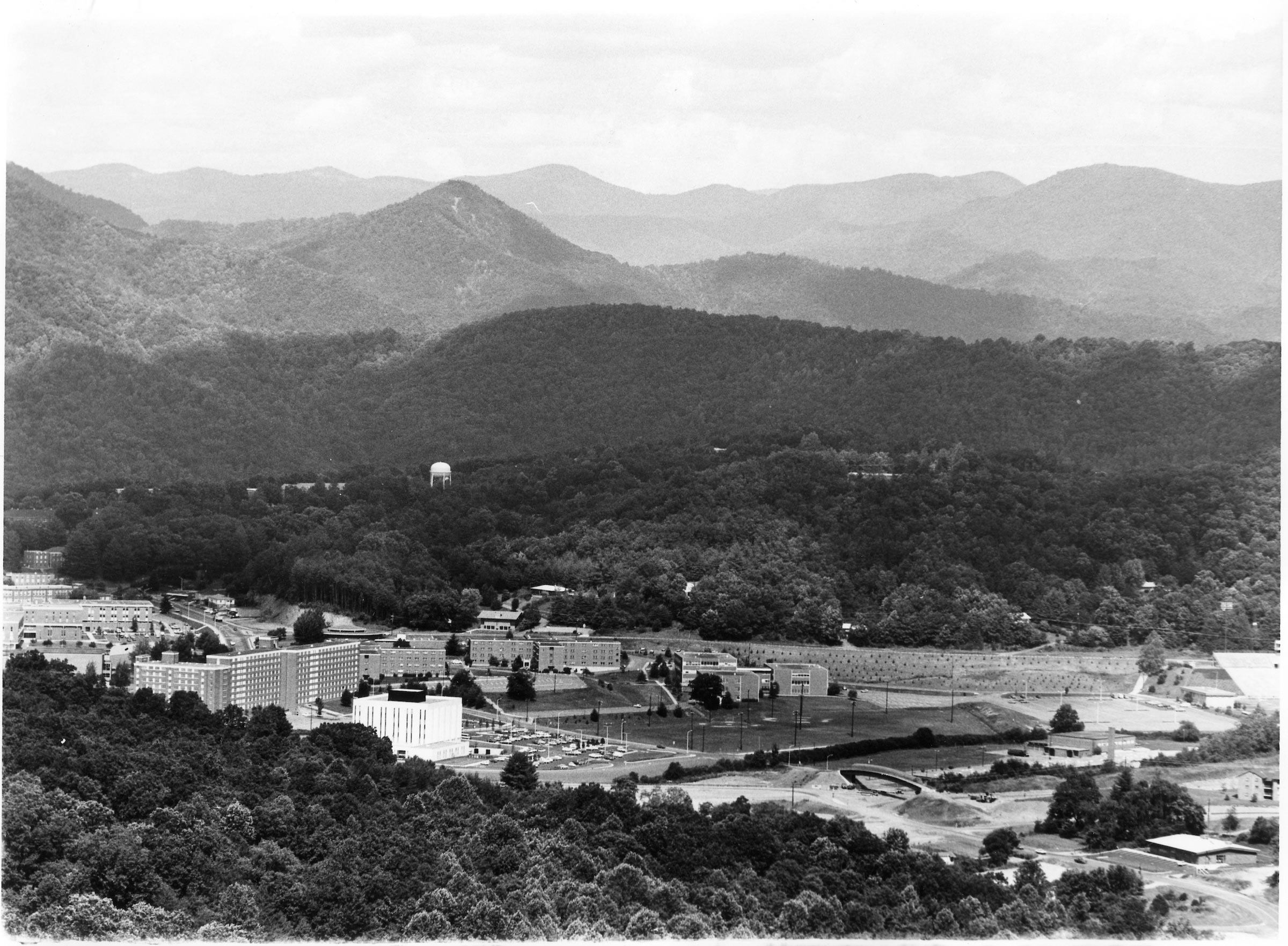 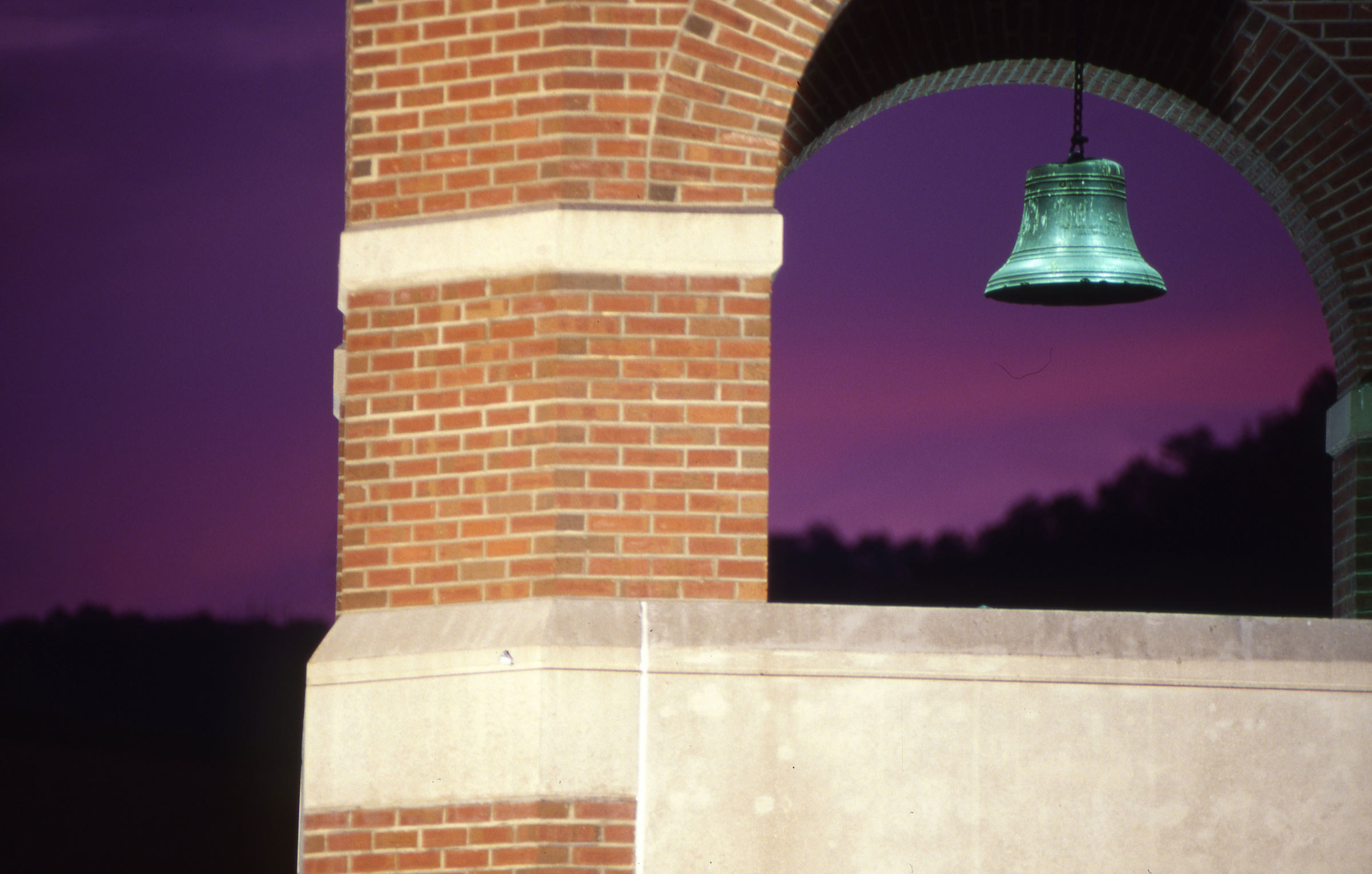 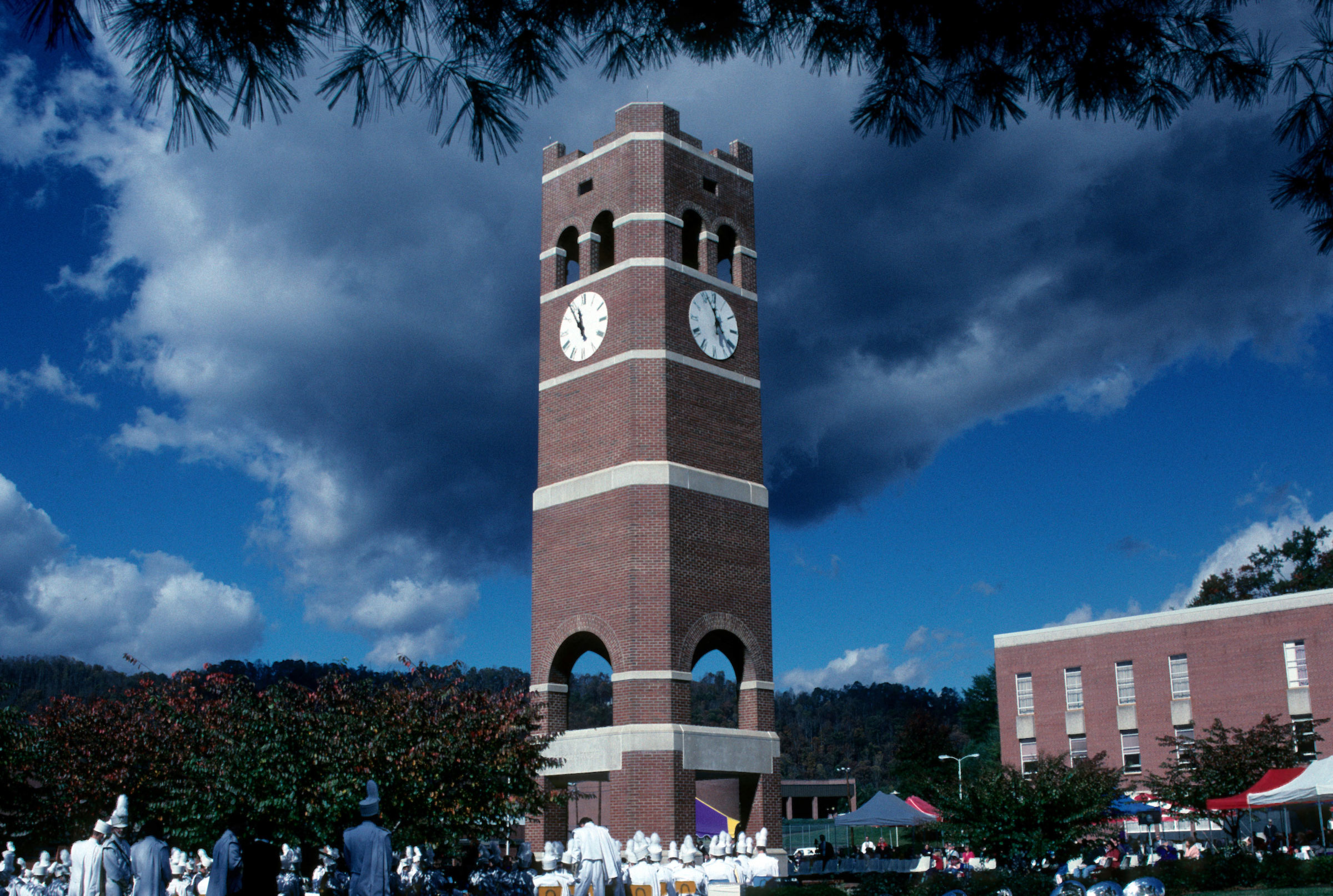 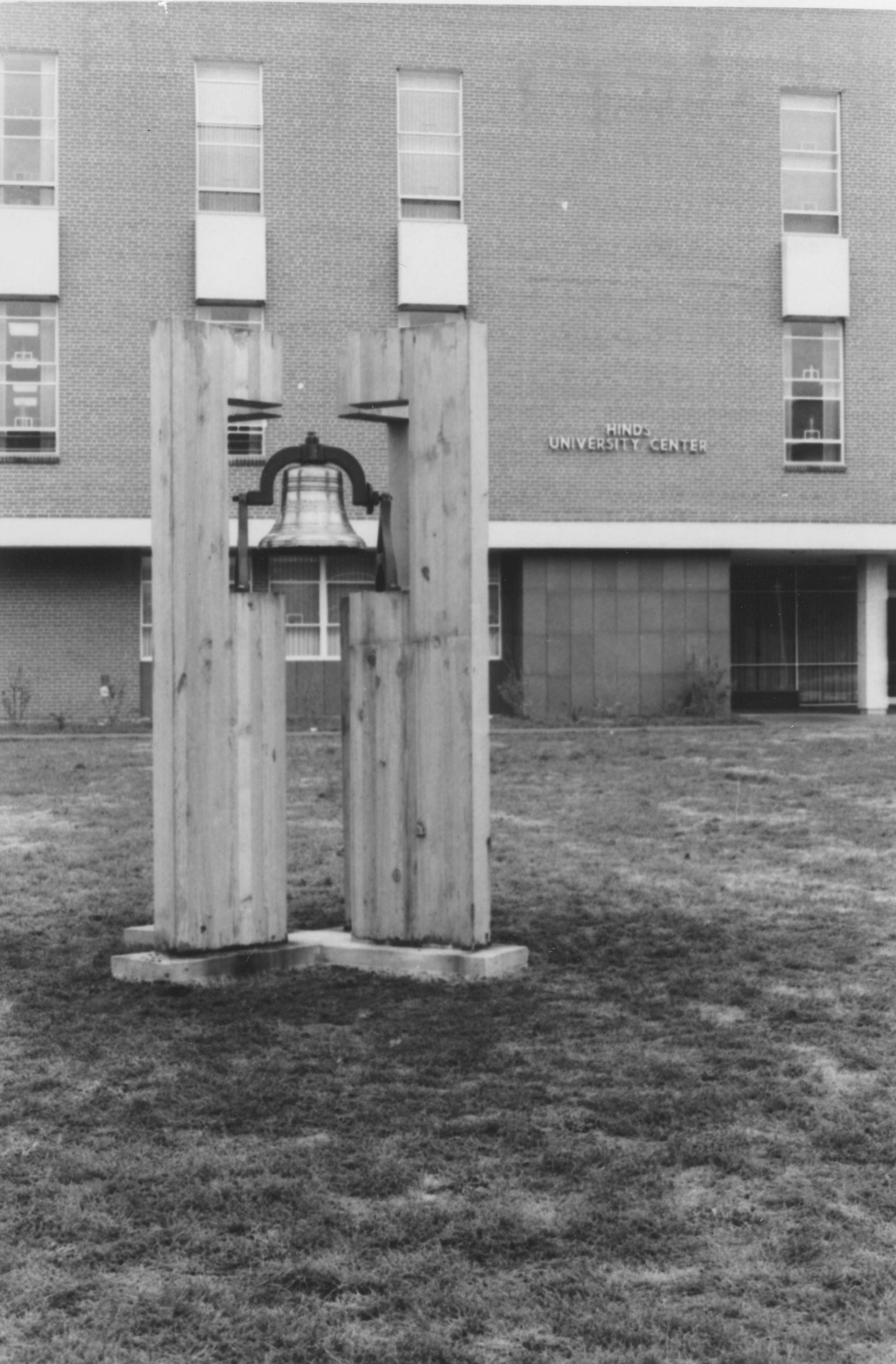 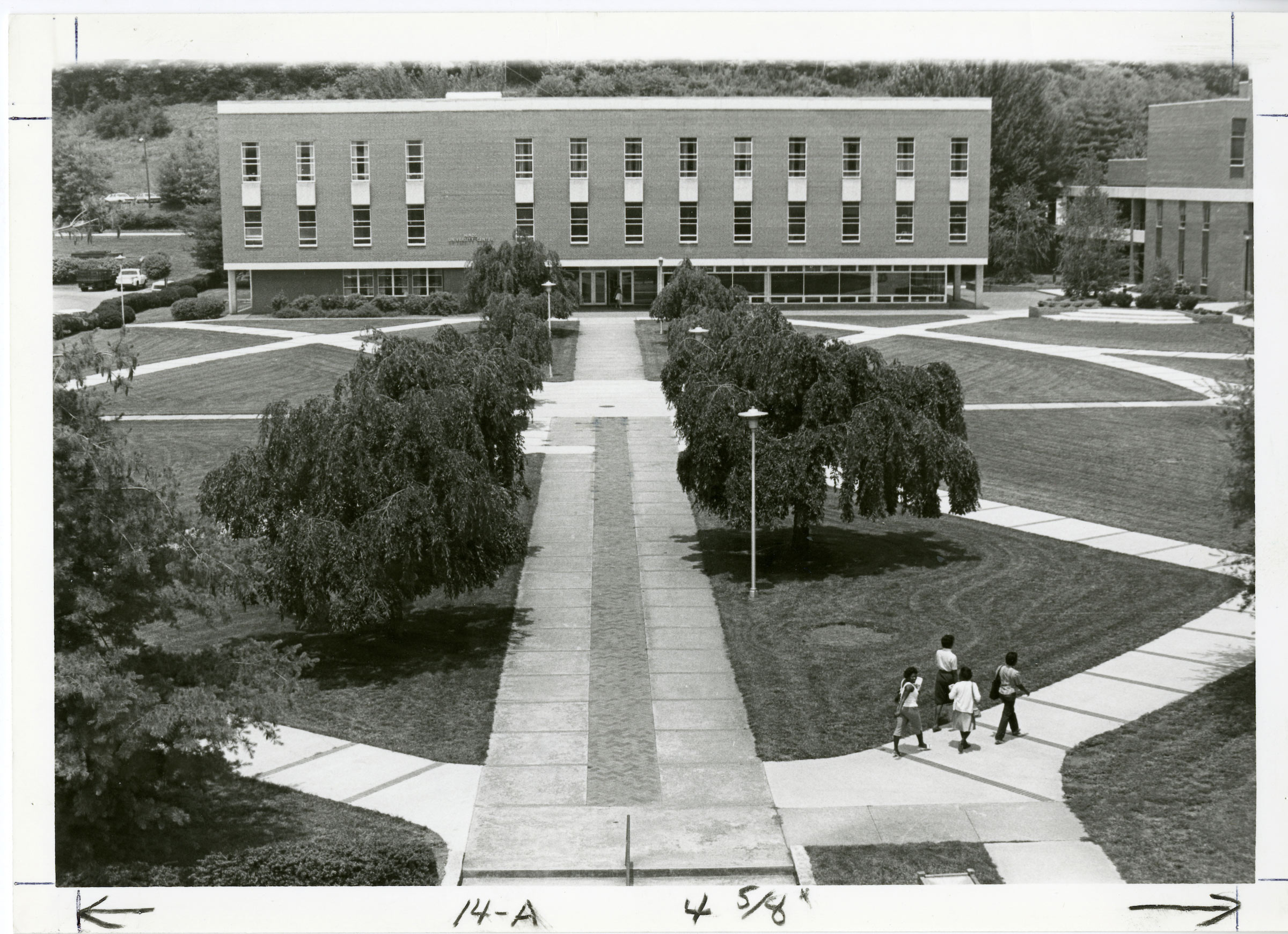 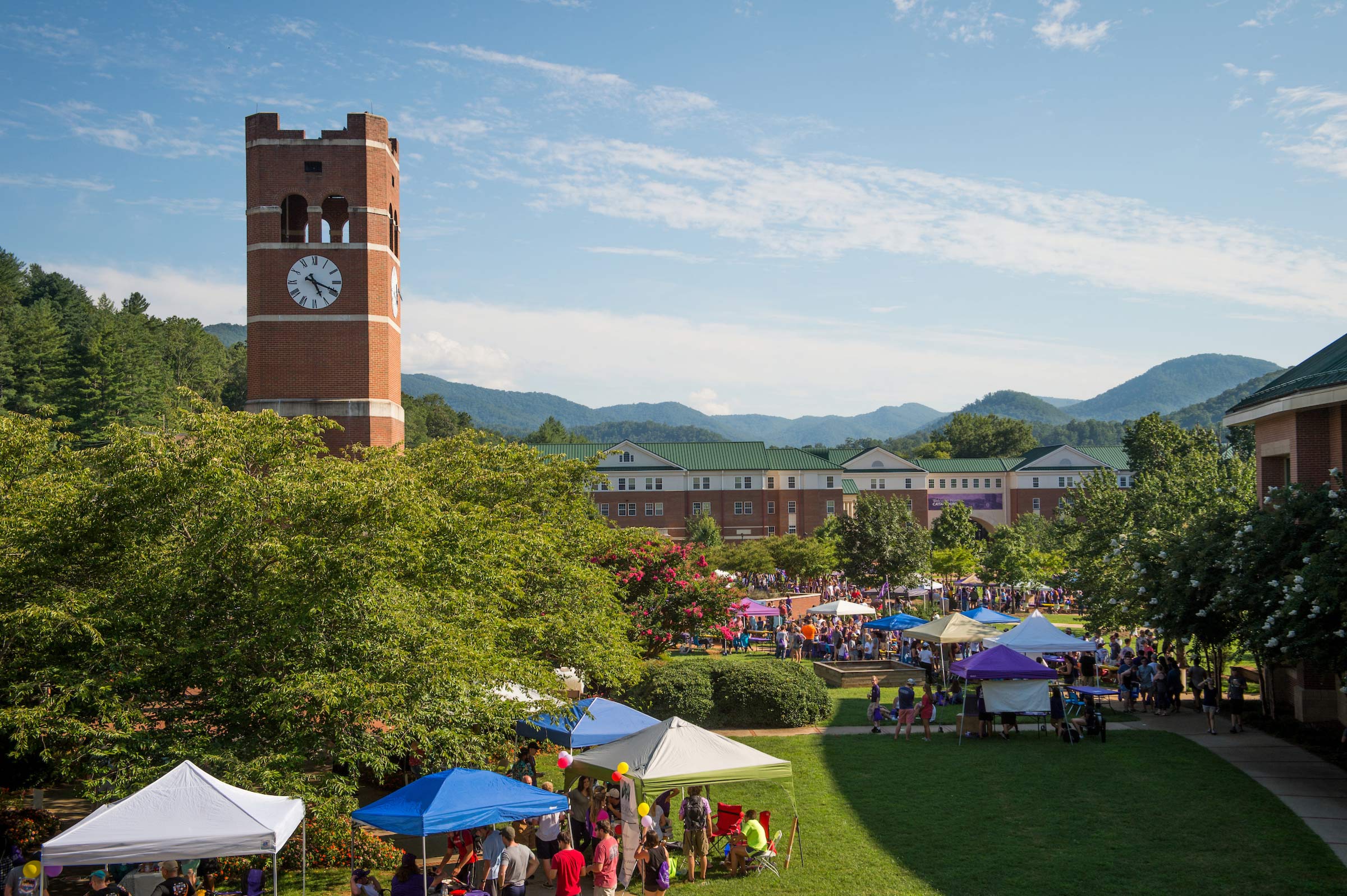 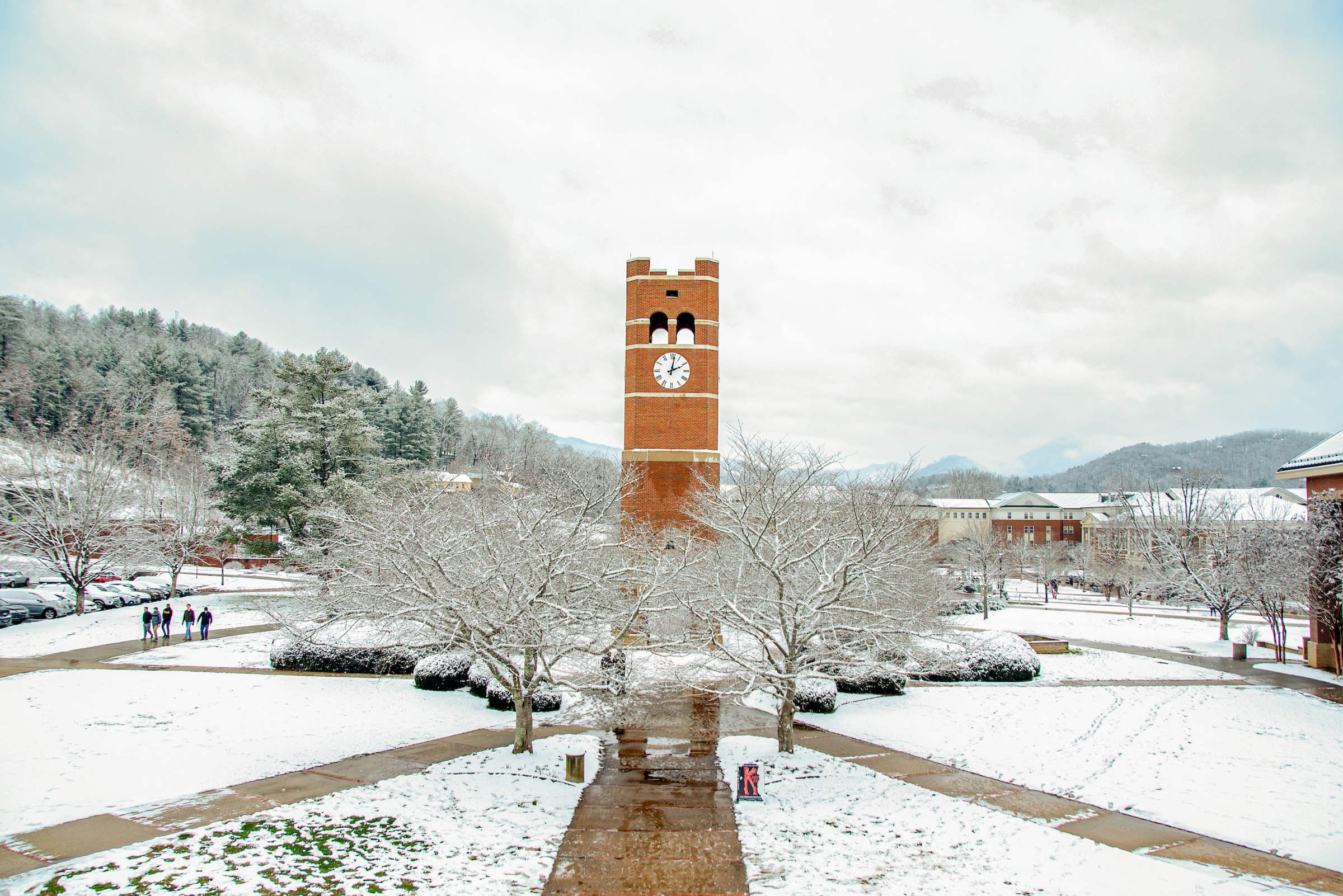 The 66-foot-tall brick structure was built on the lawn of A.K. Hinds University Center in 1989, WCU’s centennial year, and officially presented to the university as a gift from the WCU Alumni Association on Homecoming day that October.

Coulter spoke to the crowd assembled at that dedication ceremony. “There are some who feel that symbols bear no importance, that icons are for others, but there can be little doubt in the minds of all of us here today what a symbol can mean,” he said. “We do need our symbols. We do need something to give meaning to life, to study, to education, to the university. We feel that in this Alumni Tower we have arrived with a symbol of Western Carolina University, a symbol that will last forever and one that will grow increased in meaning to all of us here today and to those thousands and thousands of young people who will come after us.”

The bells of the tower’s electronic carillon rang precisely at 11 a.m. that day to mark the beginning of the ceremony, and then rang again with the musical notes of the WCU alma mater as the event concluded and visitors lined up to walk through the Alumni Tower arches. Jim Manring ’74 MBA ’76, a longtime development staff member who was then director of alumni affairs, participated in a ceremonial ribbon cutting with Coulter and others. Manring, now retired, recalls that Coulter first approached him in 1987 with the idea of building a tower on campus. Manring took the proposal to leaders of the Alumni Association, who were excited about taking the lead for the fundraising that would be necessary to build the structure, which came at a cost of $350,000. What followed was “a lot of legwork by many people” as university and Alumni Association leaders made contact with alumni and friends of the university to seek donations and pledges, Manring said. “We always thought of the Alumni Tower as the Alumni Association’s gift to the university on the occasion of its centennial, and the prospective donors we made contact with liked the thought of that,” he said.

A groundbreaking ceremony for the project was held in March of 1989, seven months before the dedication, and one of the participants in that ceremony was Arnold Isaacs, president of F.N. Thompson Construction Co. of Charlotte. Isaacs gave the effort a big boost by building the tower at cost — with no markup to make a profit, Manring said. “It was pretty rewarding that so many people gave, and gave generously. The cost doesn’t sound like that much money now, but back then it was a daunting challenge,” he said. The tower, standing 18 feet square at the base and with four large clock faces, was scheduled to be completed by late summer — two months before the centennial Homecoming.

Ceremonies connected to the Alumni Tower project weren’t limited to the groundbreaking and dedication events, however, as university officials and alumni gathered around the structure again on Homecoming day in October 1990 to mark the installation of WCU’s old Victory Bell in the tower, bury a time capsule of university-related materials directly under the structure and unveil plaques with the names of major contributors for the project.

"a symbol that will last forever and will grow increased in meaning to all of us here today and to those thousands and thousands of young people who will come after us.”

The Victory Bell, a WCU artifact with a colorful history, hung in old Madison Hall in the hill section of campus from 1904 until 1938 and was rung to signal changes in class periods. When Madison was razed, the bell was mounted on a stone base between Moore and Joyner buildings, where its ringing announced WCU athletics victories. Later, to reduce the amount of “unauthorized ringing” by students, the bell was moved closer to the old Student Union. In the late 1960s, it was relocated to a site in front of A.K. Hinds University Center, where it remained until it was damaged by a “prankster.” The bell still hangs from the Alumni Tower’s lower roof, minus the clapper.

The time capsule is scheduled to be unearthed during WCU’s 150th anniversary year — 2039. It contains letters from WCU officials, centennial year publications, centennial memorabilia, mementos of student life, audio and video tapes, and publications. Kathy Abbott Beam ’67 MED ’79 EDS ’83 was president of the Alumni Association in 1990, and she took part in the lowering of the time capsule. She also attended the dedication at which Coulter spoke about the tower’s value as a symbol of the university. She said his words continue to have meaning for her three decades later. “Each time I see the Alumni Tower, my heart swells with pride knowing that I was part of this memorable project, and I think of my mother, Dorris Brown Abbott ’41, who entered Western Carolina Teachers College at the age of 16,” she said.

The elements of time and weather haven’t always been kind to the Alumni Tower. The controller system for the carillon and its amplifier were reportedly fried by lightning in 2009, and both had to be replaced, but the carillon horns that create the bell tones are still the original ones. In recent years, the clock motor has been an issue, but in the summer of 2018, the motor, the clock hands on all four faces, and other associated equipment were replaced, said Daniel Fiskeaux ’95 MCM ’15, project manager with WCU’s Department of Facilities Management. The tower received a general facelift this past summer, during its 30-year anniversary, as work crews pressure washed the structure and surrounding area, painted beams, reroofed the top two levels of the tower and took care of other issues, Fiskeaux said.

"The Alumni Tower has a lot of meaning for a lot of people..."

In accordance with Coulter’s original vision, the Alumni Tower truly has become a symbol of WCU, with its likeness reproduced through photographs and art to illustrate many WCU documents and forms of media, Manring said. It also is the university’s centerpiece, with the surrounding lawn being the location of countless student gatherings and even a few marriage proposals. The structure stands tall at one end of the university’s relatively new Central Plaza, which also includes a fountain constructed through alumni contributions in 2011. The Alumni Tower has become a landmark for many, from freshmen learning their way around campus to those alumni who were Catamounts many years before it was built.

“It’s not just brick and mortar,” Manring said. “The Alumni Tower has a lot of meaning for a lot of people. Overall, it was just a great feeling of accomplishment for Alumni Association members to be a part of creating this symbol of the institution. It was a real good thing to do, and it still feels good.” 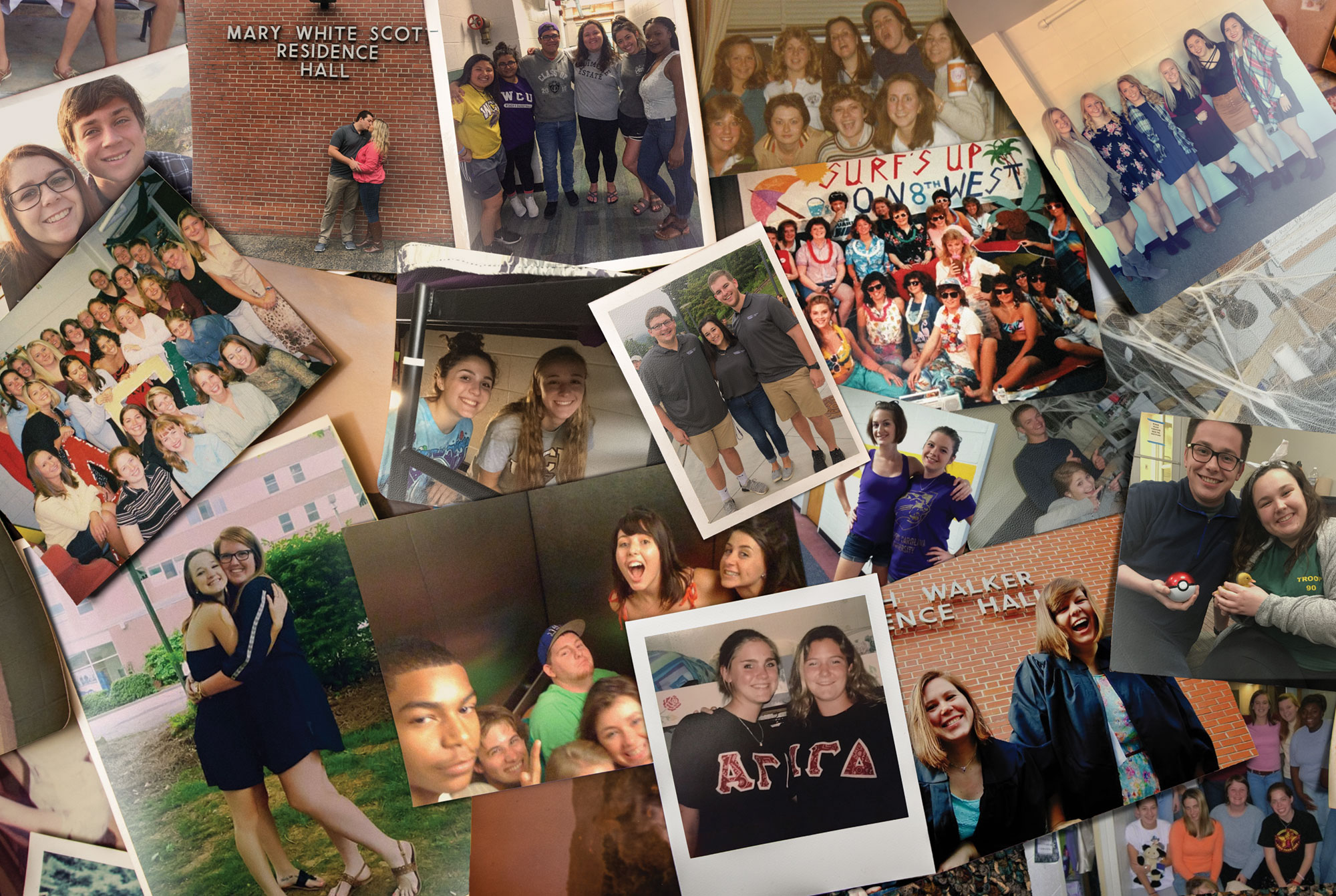