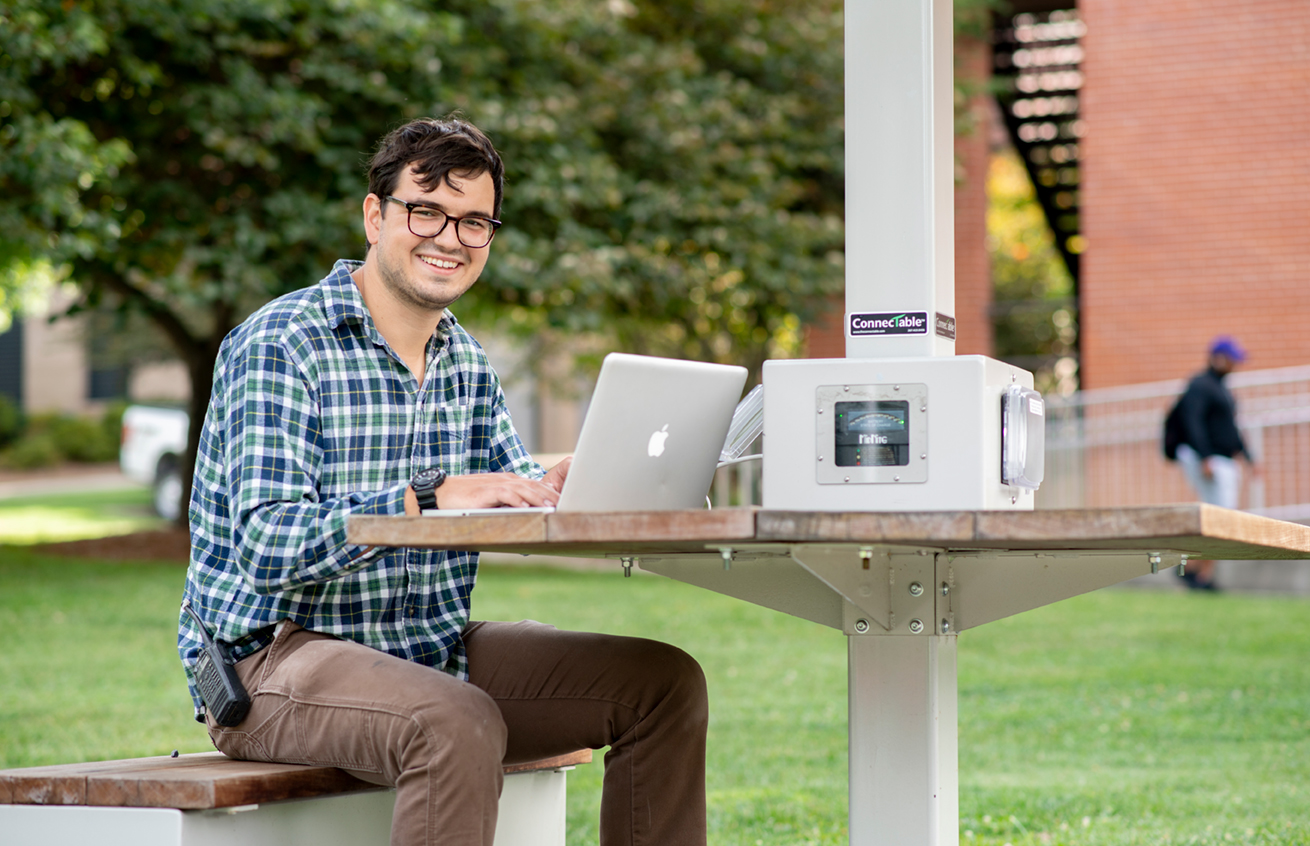 His house sits at 2,800 feet with a straight-on view of Clingmans Dome and Waterrock Knob. Pivot right and you see the Blue Ridge Parkway. Look a little farther — let’s say, into the future — and you’ll likely see him as the superintendent of one of America’s national parks. That’s his goal, at least, to help protect and manage the outdoor spaces that helped define his love for wilderness and lay the road map for what he hopes will be his life’s work.

At age 23, Joseph Guseman is a bit of a paradox: old soul wonder kid. He graduated from Western Carolina University with a bachelor’s degree in parks and recreation management in December 2017, a semester early (of course). He’ll finish his master’s degree in project management through WCU’s College of Business in December, all the while working fulltime for WCU’s Facilities Management. He took the job for a few reasons:  it would pay for his graduate degree, he wanted some project management experience under his belt, and staying in school was a good way to wait out what he sees as a government slow-down in hiring park service personnel.

But that doesn’t mean he’s been twiddling his thumbs, waiting for the world to change. Since his freshman year, Guseman has made the most of his time at WCU preparing himself for his dream job. He’s been building a park service-friendly resume by taking on leadership roles on sustainability issues, implementing sustainability programs, and creating opportunities to educate other students about environmental stewardship — turning WCU into a national park practice ground, of sorts.

“I have been goal oriented my whole life,” Guseman said, “But, also, I want to really do something that betters the community that I’m living in or betters the planet in some way. That’s why I did sustainability early on.”

He's not kidding. Guseman worked as a student intern in the university’s Office of Sustainability and Energy Management his first three years on campus, leading freshmen who lived in the residence halls on sustainable education hikes, introducing many of them to hiking trails and outdoor spaces they didn’t know existed in Western North Carolina or at WCU. He worked with the resident assistants on establishing the educational outreach programs. “I would talk about the local fauna and flora of the area, and of the area itself and relate it back to sustainability because really, essentially, it all relates back to sustainability,” Guseman said. 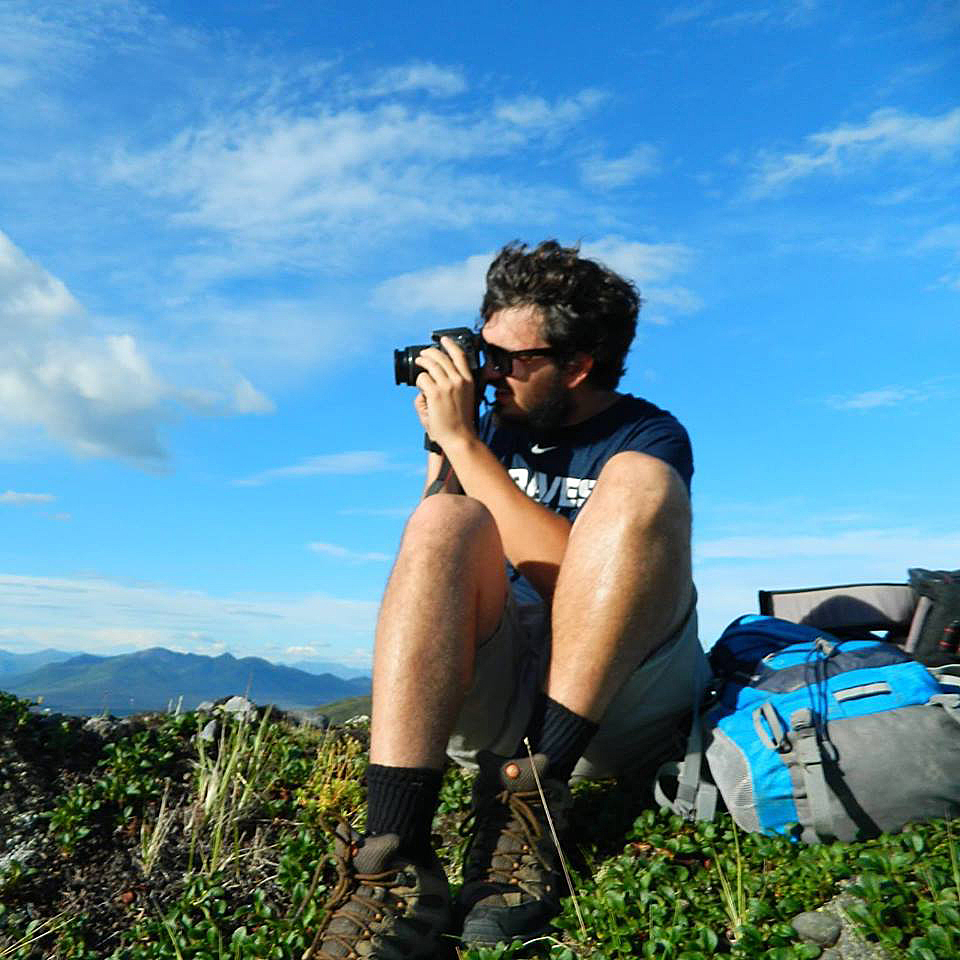 Guseman also was integral to the stabilization of a tailgate recycling program at home football games, said Lauren Bishop, WCU’s chief sustainability officer. “He really helped smooth that out and get that program launched, working out all the logistics and getting student volunteers. He’s a really hard worker, diligent and very dependable,” Bishop said.

The tailgate program was simply a matter of trial and error and putting in very long hours, said Guseman, who became WCU’s unofficial recycling coordinator until the university eventually hired one, its first, in 2016. “EcoCATS was one of the organizations that would try to run it, but they didn’t really have the facilities to back up the large-scale effort,” he said. “Working with Lauren, I was able to provide that support with Facilities Management.”

That meant arriving six hours before game time to distribute the ubiquitous blue bags, which tailgaters often stuffed with trash instead of recycling items because of the large amounts of people and waste.

“Each year I learned more and more about what worked best,” Guseman said.

And what that was, he discovered, was using a combination of 50 customized recycling bins along with hundreds of blue recycling bags, and placing them strategically throughout the tailgate areas for the large groups of tailgaters, such as alumni, sororities and fraternities, and for the community walk-through areas where people passed from tent to tent.

“We zip tied the lids shut on the bins and then we drilled a little hole that was only big enough for a can or a bottle so they couldn’t put trash in it. Then we clearly labeled them as recycling bins and set those out,” Guseman said. It worked, but the job wasn’t over. He recruited students to help clean up the recycling containers after the games. 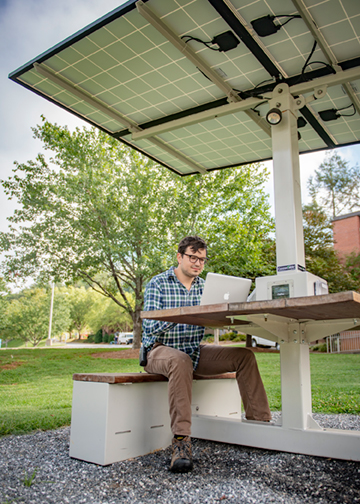 Guseman also established recycling programs in the residential halls and chaired the Sustainable Energy Initiative, a committee that helped implement ideas from students and staff for making the campus more “green.” Two of the projects completed under his watch were installing both a charging station for electric vehicles and two solar panel picnic tables that charge cell phones. The EV charging station and one of the picnic tables are near Reid Gymnasium and the other picnic table is near Belk Building.

Guseman grew up a Boy Scout in Southport, a beach town on the Cape Fear River, as one of three children, whose mother was a one-time park ranger, and his dad a project manager for Duke Energy. He spent his childhood kayaking the remote swamps around Oak Island, enjoying the serenity of the waterways, while keeping tabs on the 10-foot alligators that lay warily along the bank.  “You get out in the swamp, and it’s so peaceful,” Guseman said. “You can’t hear anything except the birds and the fish and the insects.”  His family summered at their cabin in New York’s Adirondack Mountains, where they hiked, and fished for native trout in pristine ponds and lakes. And they traveled to many of the national parks out West.

As Guseman’s respect and desire for wilderness spaces began to form, he found kinship with the writing and philosophy of two of America’s oldest conservationists, the late Aldo Leopold and Bob Marshall, both of whom wrote landmark books — “A Sand County Almanac” and “Alaska Wilderness” respectively — that stand today as definitive hand books in the environmental and conservation movements.

“I read a lot of Bob Marshall’s books. He talked about even then how it was just awesome to get out to a place where you heard nothing but nature,” Guseman said. “It’s something you can even do around here, which is incredible. You can get to certain hiking trails here and just hear nothing but nature, and that’s something that’s a treat for us. I worked with Russian scientists in Alaska, and they would talk about how America was such a great place because we valued having those areas, and other countries don’t value it as much and they sell them off to private tourism companies.”

Moved by a desire to experience more wilderness, Guseman spent two summers in Coldfoot, Alaska (population 10, as of the 2010 census), working for the Bureau of Land Management (2015) and the U.S. Fish and Wildlife Service (2016), in the Arctic tundra. Coldfoot is the farthest-north truck stop in the United States on the Dalton Highway, known as the “haul road,” because of all the truckers traveling it from Prudhoe Bay to Fairbanks. The area is also home to Gates of the Arctic National Park and Preserve and the Arctic National Wildlife Refuge.

Guseman said he once gave a ranger talk at the Arctic Interagency Visitor Center in Coldfoot, comparing the differences and the importance of places that are remote and highly populated. “You have to have wilderness, but you also have to have places like the Blue Ridge Parkway, because not everybody can pay for a trip to Alaska and a bush plane and deal with grizzlies,” he said. “A lot of people want to enjoy nature by driving up on the parkway and sitting at a picnic area, so those areas are important too.”

Guseman chose WCU because of its geographic location and proximity to what he considers sacred places: the Appalachian Trail (which he is hiking in sections), Nantahala National Forest, Pisgah National Forest, Blue Ridge Parkway and Great Smoky Mountains National Park. He bought the house with the panoramic views precisely because of its wilderness feel, although he’s only 13 minutes from campus. He spends his free time hiking the surrounding trails, puttering in his vegetable and flower gardens, and training the puppy he found abandoned near his property. He wraps himself in the solitude and quiet that help restore his energy and refresh his mind. He wishes more people would do the same.

“We live in a society where we consume ourselves with our phones and our technology and social media and what’s cool and what’s not. But when you’re out in nature, there’s nobody judging you. You’re just in your own thoughts and you can really process who you want to be as a person, what your goals are, not what is cool or is going to get you Facebook likes,” he said. “I think it’s real important also to teach younger people the importance of having that opportunity to think. I feel like nowadays we’re all so busy that we don’t ever sit down and just think. You look at a lot of the early conservationists, like Aldo Leopold or John Muir, they write a lot about that, about how they fear our society is going to push parks away, and you just can’t do that. You have to have those self-thought moments.”

Guseman had many of those moments in Alaska exploring the state’s copious wilderness, especially when he got lost in a willow patch while hiking alone, and on another occasion when he was forced to crab walk for six hours down a treacherous and rocky mountain slope that shredded the seat of his pants so badly he was bare-bottomed by the time he reached the end. 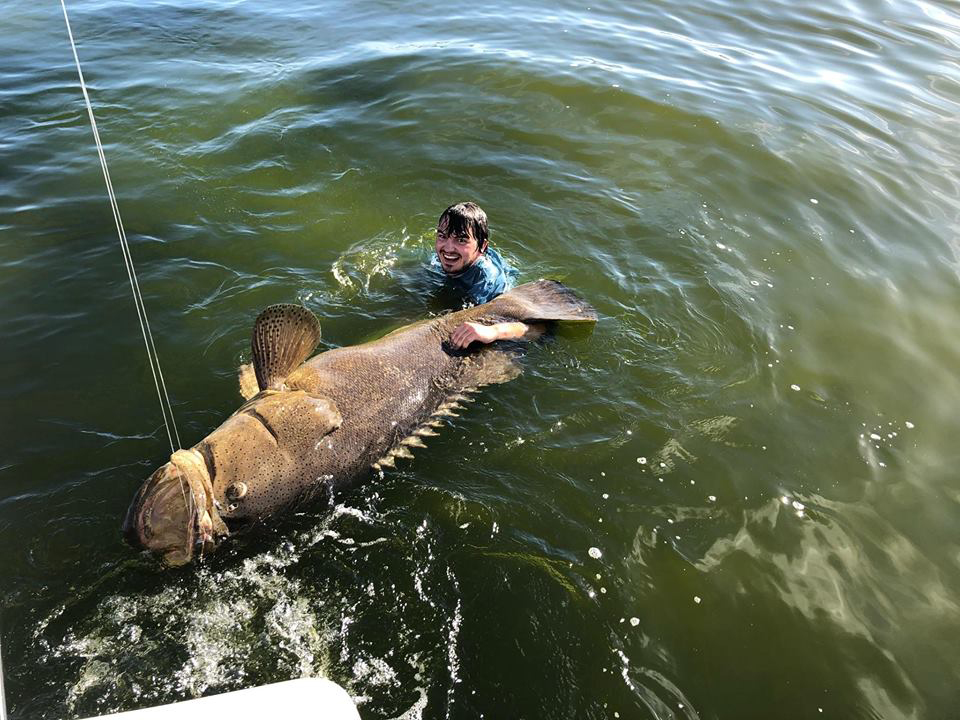 “I wrote in my journal I was keeping at the time that Mother Nature is queen and she don’t take no s?!%. I think that’s why it was such a spiritual experience for me,” he said. “Now looking back, I don’t think I was ever that close to dying, but in the moment, I learned I was not in control, you are not in control out there. That was something that was so spiritual and awesome to me, and to this day I still feel like that.”

Guseman sees parallels between his outdoor experiences and his project management classes, and said the same lessons apply no matter the environment. “Especially in project management,” he said. “You’re going to constantly have to work with the environment around you even when it’s not a beautiful forest. It could be the people you work with. That was something I really learned through hiking and outdoor experiences, that you have to work with all the situations around you. You can’t ignore the situations. You have to navigate through them. You can’t just push through them. Coming back here from Alaska, I respect everything around me more in a sense that I did before, understanding how everything works together. Even Western is one big organism. Everything works together in such a way it helps us operate as a whole.”